When Rod Goodfellow heard that we would be holding a series of time trials for women in the Midlands he stepped forward and offered to donate two trophies in memory of his late wife, Chris. Rod is a life-long racing cyclist, still holding the 24-hour tandem record with his son Peter, and, with his encouragement, Chris also achieved many national honours and awards.

As Chris was based in the Midlands for much of her racing career, trophies in her memory for our Series seemed a very fitting tribute. In 2007 we only included two competitions in the Series so Rod, and his two sons, David and Peter, commissioned his friend Colin Purdy to make the two original Chris Goodfellow Memorial bowls.

Colin is a local cyclist who knew and trained with Rod and Chris when they lived in Highley back in the 1970s. In 2009 we introduced a third competition based on fastest times and, when approached to make a third bowl, Colin very kindly both made and donated the third bowl himself as his own tribute to Chris of whom he has very fond memories. 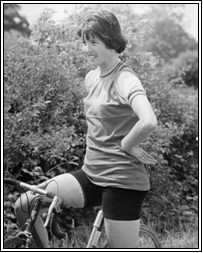 Born in 1938 and getting her first taste of riding with the Birmingham University CRC, Chris became one of the strongest female racing cyclists in the country. As a road racer she represented the Women’s Cycle Racing Association in Holland and East Germany in the mid ‘60s and she rode for Great Britain at the World Championships in Nurburgring in 1966. In 1969 she won the bronze medal in the national road race. Chris’s time trial successes riding for the Beacon Roads CC were many and varied too. She claimed the bronze medal in the National 50 in 1971 and broke the Welsh 25-mile record with 1:02:46 in 1973. She was also in the winning team for the British Best All-Rounder from 1972-1974. In her last few years she mainly rode local time trials and, having moved north, she still managed to win the North Lancs Time Trial Association Best All Rounder in 1984. In 1985, Chris was diagnosed with stomach cancer and died just 5 months later.

The Phoenix Trophy was made by Clair Parfrey, one of the founders of Phoenix Velo. This is what she said about how she came to make the trophy:

"I've always enjoyed crafts and in particular pottery but struggle to find large blocks of time between work and training to make anything with clay. Working in a bike shop gave me access to scrapped bike bits and last Christmas I made Christmas tree decorations from recycled chains so when the Midlands Women's TT Series needed a trophy for the novices competition it seemed like a good opportunity to make something larger. The centre is a rear cassette, layers of chain were then glued in place on top. The final shape was then covered with carbon resin (another product used in bike manufacture) giving it a lovely shine with an orange tint."

When the team competition was introduced in 2015, Nadine Mayhew, a previous overall winner of the Series, kindly contributed a lovely glass trophy.